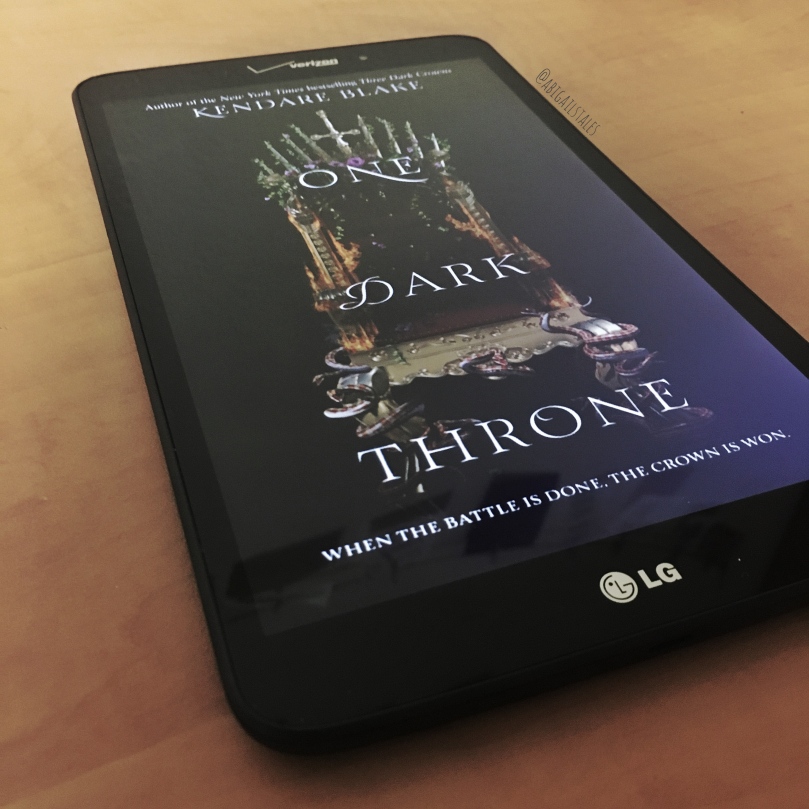 When I picked up Three Dark Crowns last year, I was really excited to read it. I had seen some reviews that weren’t overwhelmingly positive, but I remembered loving the Anna Dressed in Blood duology when I was in high school. I wasn’t expecting a lot from it, but I thought I was going to enjoy it. And for the most part, I did. I agreed with a lot of reviews that it was full of exposition and was lacking in action, particularly at the beginning. In the end, though, I liked it. I was, however, ready for the next book.

It took me a while to get my hands on a copy of One Dark Throne because I didn’t feel particularly inclined to buy it, and I was worried I had forgotten all that had happened in the first book when I finally got a library copy. I shouldn’t have worried. For as much as the first book was a little underwhelming, I retained most of the events. It meant I was finally ready for some action.

And boy, did it deliver. I knew from the end of Three Dark Crowns‘ cliffhanger that I would like this one more. Because the first book was mostly world-building, the second one was able to really take off. It’s equal parts personal drama and political intrigue, with a healthy share of fight scenes. I thoroughly enjoy politically-driven plots, and so I really liked seeing how the events on every side played out throughout the novel. There’s also enough conflict within each queen’s circle that the drama unfolds beyond that of just warring sides. I really think the characters drive the story in a unique way that works with the plot so that it’s not solely plot- or character-driven. It’s something that could’ve easily gone one way or another, but that ended up working really well. A lot of my opinions revolve around the characters rather than the plot, so there are some minor spoilers below.

I did enjoy it more than Three Dark Crowns, but I also liked Three Dark Crowns a bit more than the average reader seemed to (at least from what I saw) because I really appreciate good world-building, so the addition of the action and drama made One Dark Throne more engaging as a whole. I loved seeing where the characters went and how Blake managed the conflict between the queens. It would have been really hard to just kill off a protagonist just from a logistics point of view, but also for fear of killing off a reader’s favorite queen and forcing them to stop reading. At the same time, there is a risk with taking the easy way out and not killing any of them off, even though that’s the point of the plot. Blake navigated these problems exceptionally well, so major props to her for that.

Still, I had some issues with it. For one, it just wasn’t as solid of a plot as I typically like to see. Three queens battling it out should be really interesting, but I thought it jumped around a bit unreliably. Like I said, I liked seeing all the different aspects of each queen’s circle, but that doesn’t mean I don’t like a little bit of consistency, and I felt like the book didn’t meet my standards for that. Also, I am not happy with the ending. It’s more than just that it wasn’t what I anticipated (because in a lot of ways, I did see it coming), but mostly it felt ridiculously rushed. This was also a bit of a recurring problem throughout both books for me. Characters seemed to get over things very quickly, in ways that aren’t believable. The ending is a prime example of that. In addition, I would’ve liked to see some of the side characters develop a bit more. I thought there was a lot of interesting development of Katharine, Arsinoe, and Mirabella, but that there wasn’t enough for characters like Billy and Jules (who are arguably my two favorite characters in the series). They definitely had some development, but I wanted more.

For the queens, Katharine was my absolute favorite to read about. The fact that her change in persona goes unexplained is as fascinating as it is frustrating. I kept waiting for a reason and not getting one, but rather than anger me, it made me want more of her. I wanted to be able to see just how different she had become to see if I could figure it out myself (I couldn’t). All the queens went through some change after the first book, but Katharine’s was by far the most fun to read about.

That being said of Katharine, Arsinoe is my favorite of the three. There’s just something endearing about her character that I really like. I know that’s an odd choice of words, but I truly think her loyalty to her friends makes her genuinely likable, despite the fact that she is never portrayed as being generally liked. Maybe I’m just partial to naturalists, but Arsinoe is the kind of character I really love, who thinks herself independent (and is) but knows when she is doing the right thing, no matter what it costs her.

Now, Mirabella. There’s just something about her that I don’t like. At first, I thought it was because of how she was raised, and some of it definitely is, but it’s more than just the fact that she’s the one every thought would be queen. I really don’t think she’s all that interesting. She’s the strongest of the three? Great. What else is there to her? My honest answer: not that much. I appreciate her sentimentality towards her sisters and think it’s really important to how the plot progresses, but because it’s really emphasized as being the center of Mirabella’s character, she doesn’t get as fleshed out as a character as she could.

Like I said before, Jules and Billy are my favorites in the series. I’m really happy Jules got quite a bit of focus, because I think she is one of the strongest supporting characters I’ve read recently. It’s not often that we see the best friend overshadow the talents of the protagonist, but Jules does. And although there are certainly points when Arsinoe is jealous of Jules’ abilities, Arsinoe is generally supportive and loyal to her best friends. Rather than being a constant threat to their relationship, they’ve reached an essential understanding that is really refreshing. Still, I would have liked Jules to struggle a bit more with her place in the action. She’s dedicated to Arsinoe, and that’s fantastic, but I didn’t see a lot of growth in her character. Mostly, I’m just mad she forgave Joseph so quickly. The events of the first book between them do remain a constant concern for her, but Jules doesn’t seem as bothered by them as I would’ve liked her to be. I know it says a lot about her as a person, but maybe it would’ve been better for her to be a little less forgiving, given her a flaw that made her a little less perfect. Billy, however, is the right kind of perfect. He has his issues, mostly with his past, but I love his commitment to Arsinoe. His being sent away made for an unexpected turn in the plot. I kept expecting the worst to happen, and it kept me on the edge of my seat. It also allowed him to lose some of his black-and-white view of things. Because Billy was able to get to know Mirabella and form a friendship with her, he realized he couldn’t keep on believing she was evil. Suddenly, he had to face the gray area of the Ascension Year that he had avoided before. And I think it really helped the story along, in addition to making Billy a more rounded character who wasn’t just in love with Arsinoe and defined by it.

And now for my thoughts on the ending. Major spoilers below, so be warned.

I honestly cannot tell if what happened with Pietyr in the Breccia Domain is supposed to explain what happened to Katharine, and instead of being intrigued and ready to figure it out, I’m frustrated that it’s going to be all the explanation we get. And that doesn’t sit well with me. If that’s all the explanation there is, it feels like a major plot hole that was awkwardly and unconfidently placed because Blake didn’t know how to solve it. While I really believe and hope there will be more about it based on what I remember from Anna Dressed in Blood and how Blake handles complicated plot points, I am concerned it’ll never be fully explained. I don’t want to leave a series with unanswered questions. The whole thing happened very abruptly and felt rushed.

As irritating as the Katharine and Breccia Domain aspect of the ending was, it doesn’t compare to how mad I am that Joseph died. Maybe it’s meant to be karma for him cheating on Jules, but I can’t believe that. I know it was really meant so that Jules would leave and return to study her war gift, but I’m sure that it could’ve been done differently. Also, it breaks character for Jules in a lot of ways. As I said before, one of her best qualities, in my opinion, is her loyalty to Arsinoe. She is so dedicated to following her anywhere, and then she just up and leaves? Yeah sorry, not buying it. I know there’s more to it than that, since Jules believes Mirabella will replace her, but I think the bond between Arsinoe and Jules was strong enough that the addition of Mirabella wouldn’t have really mattered. I’m thrilled Jules is going to learn more about her war gift; it was one of the things that made her especially interesting in this book. But if the cost was Joseph’s life, I don’t think it was worth it. It seemed like a generally unnecessary character death that was really just a way to get around drama over having Joseph, Jules, and Mirabella being together and to force Jules to leave in an uncharacteristic way. Also, this aspect of the ending is really rushed as well. It’s just: Joseph’s dead? Okay, then Jules is leaving. I can’t fathom that anything like that would happen as quickly as it did. I mean, the whole thing happens in four pages. I counted. Nothing about that is satisfying! I genuinely cared about Joseph as a character. For him to get brushed over like that isn’t fair to him or the reader.

Anyway, I still want to read Two Dark Reigns, if only because I want to see what’s really up with Katharine and what Jules will do with her war gift. I think the mainland plot will be interesting, but I feel like I’m most invested in what happens in Fennbirn. I do, however, want to know who the second ruler from the title is.

What did you think of One Dark Throne? What do you want answered in Two Dark Reigns?

One thought on “REVIEW: One Dark Throne by Kendare Blake” 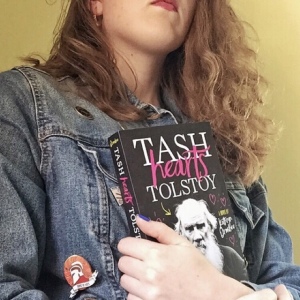